After much anticipation, the Escarpment trail run was finally here. Unfortunately, with the Wyoming trip and ensuing excitement, I didn’t get much time to prepare specifically for this race but it was an awesome experience nonetheless.


The legendary race lives up to all of its glory and they aren’t kidding that it’s “for mountain goats only”! 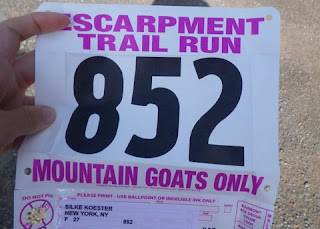 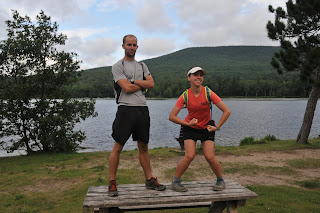 [ignorant of what’s to come!] 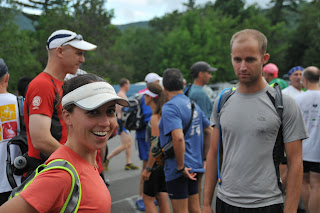 The course is a point-to-point “very remote, rugged hiking trail” which can be divided into about 5 sections each with its own bipolar personality. The only thing that’s guaranteed through out the course is wet, mossy, jagged rocks. And wherever you get a break from the rocks, you are forced to navigate a web of protruding tree roots which make you run like you’re doing football drills…. for a few miles at a time! Add in several thousand vertical feet of gnarly elevation change and you’ve got yourself a fun Sunday morning in the woods! 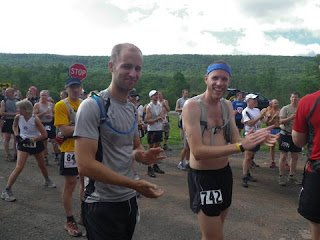 [Ben & David at the pre-race briefing]

Here’s the breakdown of the course:


1: Windham Peak (3.4 miles, 1700′ of climb)
As promised, at 8:59AM, the horn sounded and we were off… only to find ourselves bottlenecked within 6 seconds! There is a narrow bridge at the Escarpment trailhead and the race start (featuring a field of 200 runners) is about 10 yards in front of it! Only one runner can fit on the bridge at a time… And to further complicate the situation, after the narrow bridge, the trail throws you immediately into the technical singletrack ascent so there’s absolutely no chance to get into position, warm-up or ease into the madness. What would be the fun in that?! 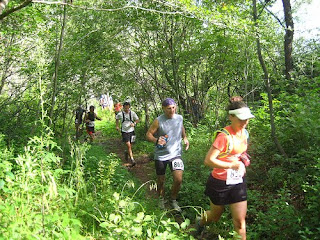 [single track at the start] 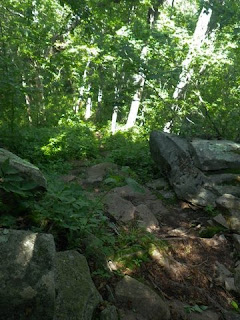 I spent most of this section trying find a spot where I wasn’t stepping on the heels of the runner in front of me or having someone else breathing down my neck behind me. It was challenging to find a moment when you could pass or be passed as the trail was about as wide as a ruler, slanted and overgrown. Within this first section, there were already all sorts of slips, trips, face-plants (that was me about 20 minutes in), and blood amongst the runners. 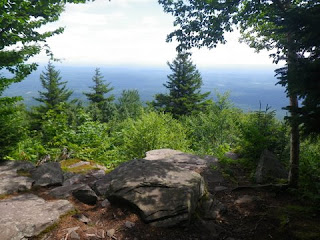 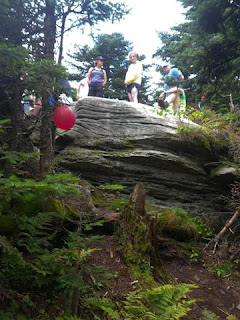 2: Burnt Knob and Acra Point (4.6 miles, rolling downhill; 700′ net downhill))
While I’m not much of a fan of downhills, it was nice to be able to get some speed going over the next few miles after having had to deal with the traffic jam on the way up Windham Peak. I was finally able to get into a rhythim with the handful of runners around me as we made our way down some slippery rocks but nothing too outrageous… yet.

3: Blackhead (1 mile straight up 1100′)
The good thing about being so unprepared for this race is that I had no idea what was coming. The bad thing… I had no idea what was coming. This section was short and um… sweet? 1100 feet of vertical ascent over 1 mile! It was SLOW! If I had a GPS watch, I’m sure it would have just turned off. This sort of incline would probably reduce you to a walk if you were on a paved road. If only this path were paved!!!! Remember all those rocks I mentioned before? Yep. Lots of rocks. Lots of calf burning, huffing and puffing. 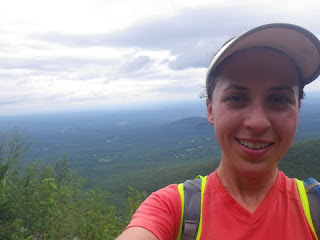 [awfully sweaty self-portrait at the top of the climb] 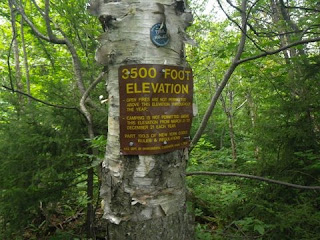 4: Dutcher’s Notch (2.8 miles, 1400′ of downhill)
Downhill! Woohoo! Except that running down a 20-30% grade on a tight singletrack with hard left and right turns on our friends the wet, loose rocks is pretty much a death sentence! Luckily, there were plenty of pine trees on the trail that you could either grab and swing from as you made your way down somewhat out of control… or crash into. And every now and then, just to spice things up a bit, you’d encounter a slick 6 ft rocky drop followed immediately by an even steeper downward slope.


I ran most of this section with ultra runner Amy Navel who also ran the Bear Mt 50M in May. I wondered what on Earth I was doing running with her once I found out that she had finished Bear Mt in 3rd place a full 52 minutes ahead of me but I definitely enjoyed her company. We comiserated over the ridiculousness of the descent and admitted that we were both completely terrified.

5: Stoppel Point (2.2 miles, 950′ of climb)
This was the crux of the race. It was certainly not the steepest or longest climb but it was, by far, the slowest and most technical and the very reason why few people run with handheld water bottles — both hands are absolutely necessary to get up! Forget trail running, there was no running involved on this section of trail. It was a ton of fun and a hell of a scramble! 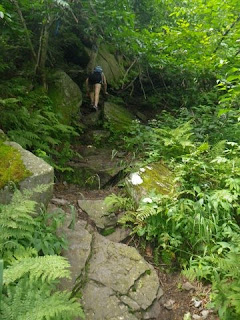 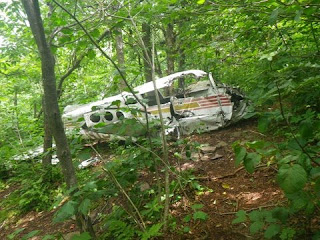 6: Final descent to North Lake (4.6 miles, 1400′ of downhill)
The aid station at the top of Stoppel Point had a huge banner that announced only 4+ miles to the finish. The entire race I had no idea where I was, how far I had to go, or what awaited me yet so I was happy to see this sign. The final push to the finish made its way down lots of 20-40′ ledges that you had to descend in repeated 3-5′ jumps. I am definitely not gutsy enough to just leap from one ledge down onto another and another so my jumps where shamelessly assisted by some butt-sitting and hands on rocks. 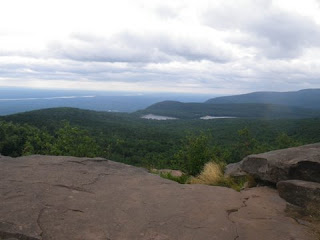 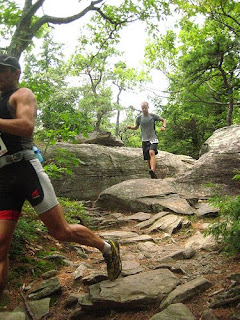 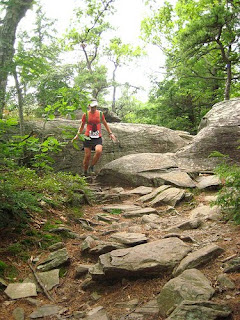 
7: The Finish
And speaking of jumps, the finish line jumped out of nowhere! There I was making my way down some big rocks in a dark thick forest when, all of the sudden, I saw a little clearing and few people about 30 feet ahead of me … the finish line! What a pleasant surprise!!! 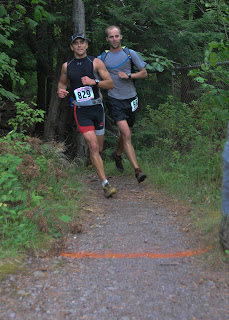 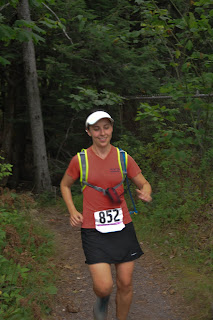 
Overall, the race definitely lives up to its reputation and I can see why there are some people who have run it every year since it’s inception in 1977! The forest was dense but every now and then you’d catch a glimpse of some incredible scenery of the entire Catskill Mountain range around (below) you. The aid station volunteers, who had to carry all of the supplies several miles on side trails onto the race course, were incredible! This is definitely a race I would run again!

And the Monday after the race, the sorest part of my body where my arms and shoulders which got a hell of a workout with all that climbing!