With only 20 runners participating in this race, this was by far the smallest trail run I’d ever been a part of. The race was part of the International Climbers’ Festival and started at a popular climbing area called Wild Iris in Wyoming’s Wind River Range. 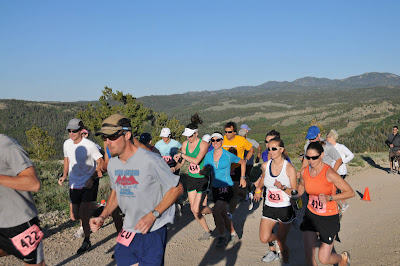 The starting line pointed up hill and sat at an elevation of about 9,000′- that’s pretty high for a sea level girl like me! The race took off with an immediate 300′ vertical ascent – my lungs burned as the well-acclimatized climbers passed me with seemingly no effort at all. While they can easily put me to shame on a climbing wall, I was not about to let them leave me in the dust on the trails a mere quarter-mile into the race.

After reaching the top of the hill, the next few miles headed about 2,000 vertical feet downhill. I let gravity take me down and just focused on keeping my hips relaxed and not tripping over the loose rocks on the trail. Anyone who knows me knows that I really struggle with downhills: I have a hard time allowing myself to approach the brink of loosing control. Today, I decided to give it a try. I turned off my mind, and let my legs fly over the rocks beneath my feet. It’s still something I need to work on but it felt great to hit the downhills without destroying my quads or falling flat on my face (although I did get a side stitch that lasted for a good 40 minutes – ugh).

At the bottom of the descent we ran a mile or so through an amazing technicolored carpet of bright yellow and purple wild flowers. Absolutely stunning!!!! I immediately regretted not having brought along my camera

And shortly thereafter we began the climb back up from 7,000′ to 9,300′. One of the miles saw a good 1,000′ ascent which I managed to run for a good chuck before I down-shifted to a power hike. During this uphill half of the race, however, I began overtaking several climbers and made my way into 3rd place (female), and 8th overall. I always feel much stronger on the ups and was pleasantly surprised to be able to pump up the hills for longer and stronger than the locals who were used to the altitude and many of whom were also veteran ultra runners themselves in addition to being badass rock climbers.

And then, the final 300′ downhill to the finish! Ryan says he didn’t even realize it was me as I was actually running downhill properly for a change (I’ll take that as a compliment!) ;-)

I finished the 21K in 2:17 and held on to 3rd female place by a good minute or so. First place male set a course record of 1:43 or something similar which is ridiculous. And the lead woman also set a course record but I can’t recall her time (probably well under 2 hours). 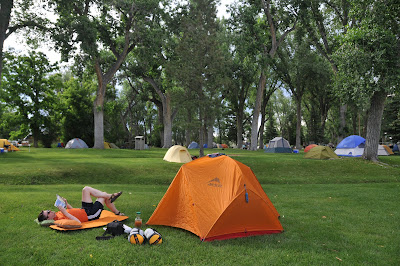 post-race nap at the Lander City Park where we camped

The race has given me confidence about running at altitude. When I lived in Wyoming 5 years ago I really had a hard time running at elevations over 8,000 feet. I ran a road half-marathon in Teton Valley (with significantly less elevation change and on pavement) in about the same time I ran this trail race at Wild Iris. I am excited to start considering some more Rocky Mountain trail races now and am pumped to pace at Leadville in a few weeks too.