Nearly a full month late but anyways…. here’s my race report from the NF Endurance Challenge San Fran 50 Miler on December 4th!
I ran the NF San Fran 50K in 2008 and was so blown away by the awesome views on the course and the killer hills that I knew this was a destination race I wanted to run again. At the time I couldn’t have even considered the 50 mile distance but, this year, I knew that was exactly the challenge I wanted to set for myself. I paired this race with Mountain Masochist one month prior because I knew both courses have massive hills. The added challenge for this course would be the massive DOWNhills.
The course basically follows a couple of figure-8 loops and gives you several 1,500+ foot continuous ascents and descents over the course of the 50 miles for a nice 21,000+ feet of elevation change. Most of it is on very runnable fire roads and wiggly single track with a few technical miles covered in slimy, mossy tree roots, and rocky steps. The course runs you through both open grassy meadows and incredibly lush redwood rainforests and, of course, rewards you with some breathtaking views of over the hills and Pacific Ocean. 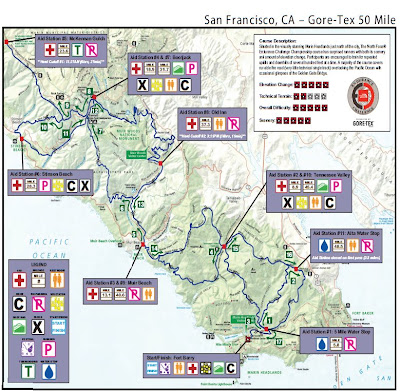 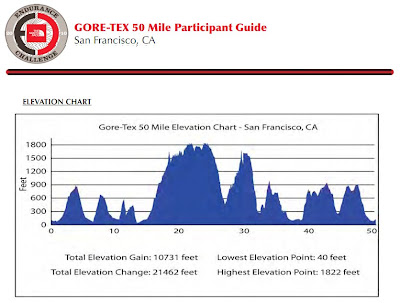 As we did two years ago, we booked a room in the Marin Headlands Hostel which is the most convenient and fun place to stay before the race. For this weekend the entire place is booked with runners which gives you a great opportunity to meet some pretty amazing people. We shared a little house with none other than Uli Steidl, last year’s 50M winner, and by the end of the weekend we were great friends! 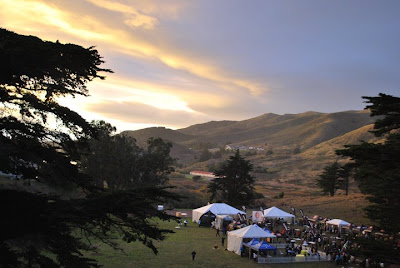 [the view of start/finish area from our house porch] 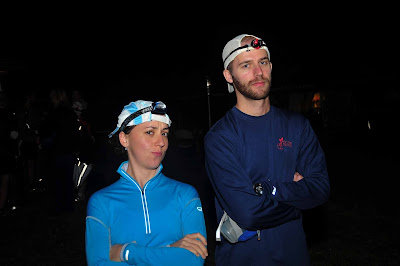 [intimidating the competition before the start] 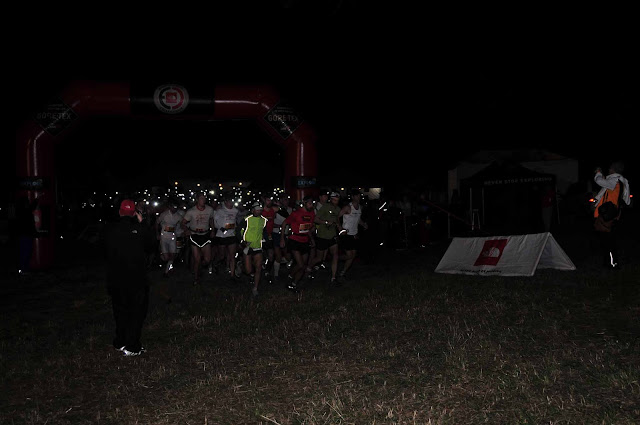 The race began a few minutes after 5AM and since it’s December, the sun didn’t rise until well after 7AM which meant that I was a good 10+ miles into the course before the first rays of light illuminated the way. I remember reading on Geoff Roes’ blog that the sun didn’t come up until mile 15 which just goes to show how crazy fast those guys are! 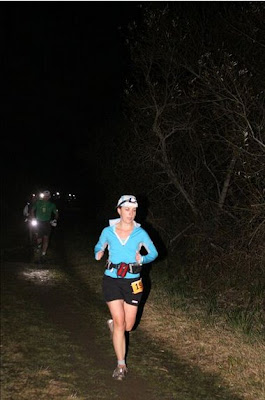 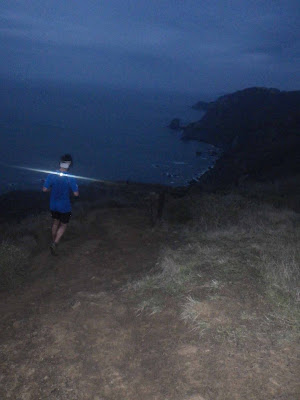 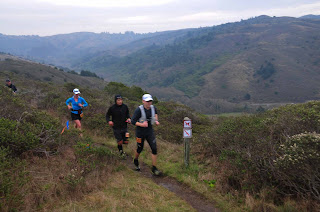 [The rain starts coming down by mile 15 on the Heather Cutoff Trail]
Leaving Bootjack aid station at mile 19 we hit up a few miles of out-and-back single track along the exposed Coastal Trail. While it was challenging to jump uphill off-trail as the fast runners came running towards you, it was fun to see them zip by at ridiculous speeds and wish them well. I missed the lead men but managed to overlap with the lead women and 2nd pack of men. 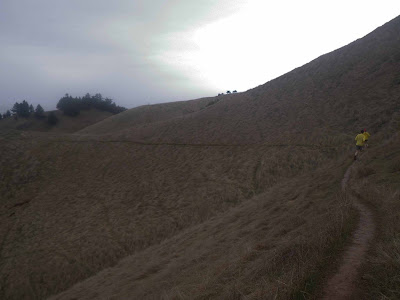 After running 1,900 feet back down to sea level at Stinson Beach we had to climb 1,400 feet back to the Bootjack aid station in about 3 miles.  This was probably my favorite section of the course as it led us into an enchanted rainforest along the Steep Ravine Trail. Enormous moss covered redwood trees and beautiful foggy dampness everywhere! Lots of rocks (memories of “Timp Pass” on the Bear Mtn course) and even the infamous ladder! Check out Leor Pantilat’s blog for some simply stunning photographs of this section of trails. Here are a few foggy pictures of this section I took whilst running: 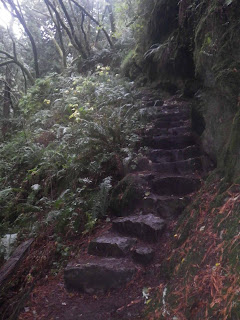 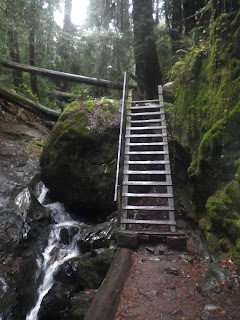 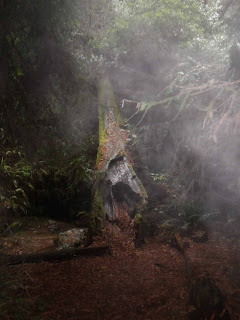 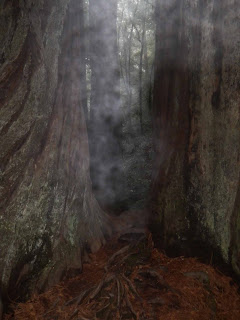 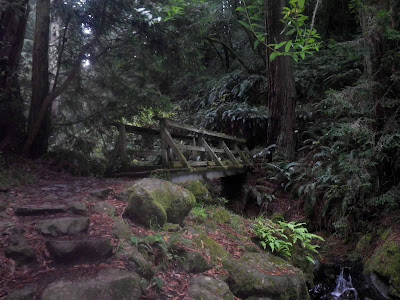 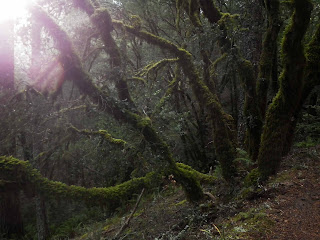 Ryan joined me as my pacer at the 50K mark at the top of Bootjack. I was happy to have his company and someone to talk to! Over the next few miles as we made our way 1,300 feet downhill I recounted mile-by-mile everything that had happened in the past 6 hours. I was feeling great and moving along quite well. Ryan ran ahead of me a few times to take videos but I haven’t had a chance to sort through them yet so, for now, I’ll just leave you with this picture on course somewhere in Muir Woods around mile 34. 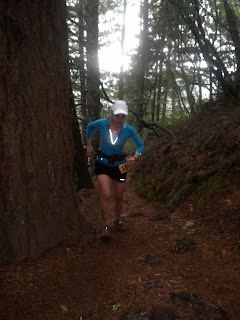 Shortly before the Old Inn aid station (mile 37), I started to feel a bit off. At one point I asked Ryan if my face was getting sunburnt because I felt like my head was really hot. He looked at me a bit strangely and said that I looked fine.


After Old Inn, the course traversed a valley with an exceptionally muddy trail and sent us back to Muir Beach (mile 40.6). After 10 miles of much appreciated company, Ryan pulled off the course and I carried on for the remaining 9.4 miles on my own.


The 1,000 foot climb out of Muir Beach onto Coyote Ridge was a killer and I found it increasingly hard to maintain a strong powerhike pace. I could not find a way to summon the strength I had in the last tough 12 miles of Mountain Masochist… I struggled mentally and physically. Finally, I hit the Miwok Trail descent into Tennessee Valley (mile 45.4), saw Ryan again briefly and knew that all I had left to do was get up the 900ft Marincello Trail and then survive the 900ft descent on the Rodeo Valley Trail to the finish. Easier said than done, but I mustered through it. My pace suffered significantly in the last 12 miles but overall, I still made my goal of finishing my 5th 50 miler with a smile on my face :-) 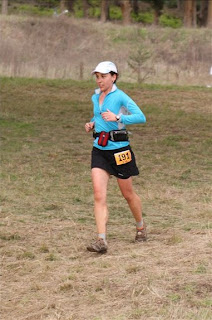 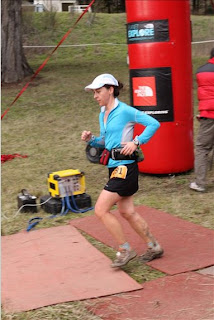 [Finish!!!]
After a miserable night’s sleep, I woke up early Sunday morning feeling the worst I had ever felt after a 50 miler. Every part of my body ached. Even my elbows. I didn’t feel like myself and was frustrated at how poorly and grouchy I felt. Remember how I mentioned asking Ryan at mile 37 if my face was red? Well…turns out…. I was developing a full-blown fever. As if the final 10 miles of a 50 miler weren’t already hard enough! No wonder those final couple of hours were so hellish!  Thankfully, once my fever broke late Sunday evening, I felt a MILLION times better: most of the soreness was gone and I stopped waddling like a lame penguin. 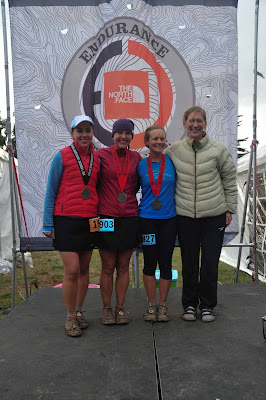 [The “hostel girls”: me, Liz, Lauren and Trisha (Uli’s wife) at the finish!]
The most special part of the entire race experience was sharing it with a great friend (Liz) whom we hadn’t seen since she moved from NYC to Boulder, meeting a new friend (Lauren) who completed her first 50K, and sharing the 1st marathon jitters with Shin who killed the 26.2 mile course finishing 1st in his age group! Congratulations! 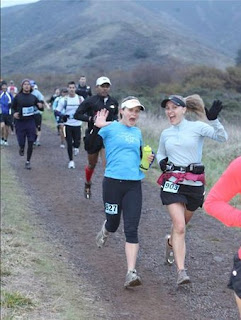 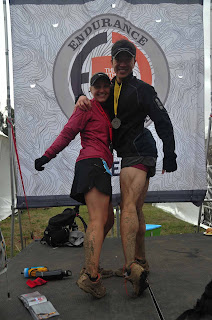 [Lauren & Liz super excited to be running 50K! Liz and Shin celebrating sexy muddy legs afterwards!]
I took a bit of running down time after this race for much of the month of December. After finishing four amazing 50 milers this year, three fast & fun 50K’s, and one marathon (plus who knows how many marathon-distance training runs), I think I deserved a little break! But now I’m bored with the running break and am eager to jump back into it! No big races set for 2011 yet as my wedding’s coming up in 6 weeks and then we’re taking some time off to travel, but I might try to sneak in a few things if I can… maybe on the other side of the world…!