Writing up this blog post has been a bit of a daunting task since we’ve been back. I have struggled to capture this breathlessness in writing. So, instead of a day-by-day write up of the three week trek which you can get from any ol’guide book or google search, I’ve picked our top moments. Here are those experiences that tickled our nerves and took our breath away on our quest to see the mountain that the local Nepali and Tibetan people have revered as Chomolungma: Mother Goddess of the Earth. The mountain that up until 1856 we only knew as Peak XV. She is… Mount Everest!

Lukla: the most extreme airport in the world!

A mere two days after finishing our three-week trek on the Annapurna Circuit, we found ourselves boarding a 16 passenger STOL (short-takeoff-and-landing) plane headed towards eastern Nepal. The flight was thrilling to say the least! Not only does flying into the Himalaya make your heart pump, but landing on a 460m long runway on a mountain slope surely gives you a surge of adrenaline!!! Sloped at a 12% gradient, the Tenzing-Hillary airport runway in Lulka, Nepal is ranked the “most extreme” landing strip in the world. Without the incline the plane would not be able to come to a stop before the end of the runway or pick up enough speed to create lift for takeoff. Are your palms sweaty yet?! 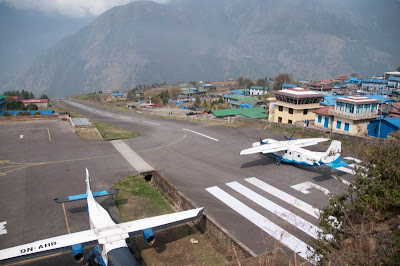 Standing tall at only 6812m, Ama Dablam, would seem to be a relatively small peak amoungst the many 7500+m giants nearby, but this mountain is one of the most remarkable and gorgeous of this entire part of the Himalaya. Her iconic shape is easily recognized from nearly everywhere on the trek and never ceases to marvel. In fact, she’s often referred to as the “Matterhorn of the Himalaya”. We caught our first clear glimpse of her on route to the mountain monastery at Tengboche and continued to admire her for days to come. 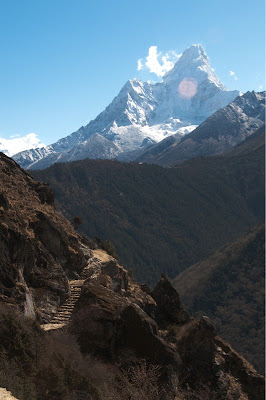 [Ama Dablam seen from the trail between Tengboche and Namche] 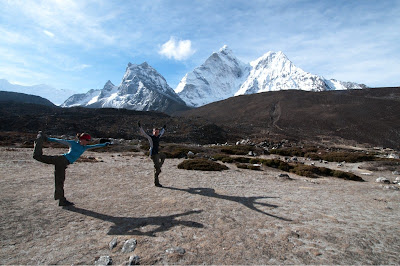 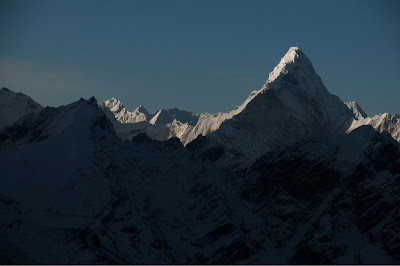 Some guidebooks translate the mountain’s name to “mother’s charmbox” referring to a large chunk of ice that hangs from her southwest face. However, a local Sherpa woman told us that it means “mother and daughter” because of the prominent ridges on each side that seem to evoke the form of mother’s arms embracing her child. Whatever the meaning, the mountain’s dramatically beautiful faces attracts many climbers each year and led us to deviate from the main trekking route and hike up to her 4,650m base camp. 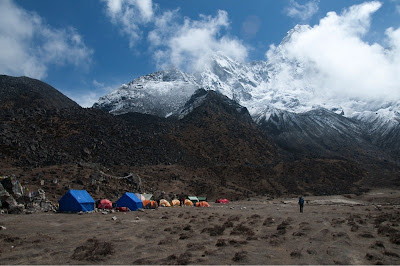 [Ama Dablam base camp; the summit of Ama Dablam is barely visible from behind the big puffy clouds.]

We had met a couple of American climbers who were attempting to summit Ama Dablam via the popular Southwest ridge but were stalled due to stormy weather on the summit. At basecamp I chatted with a Spanish climber who, like the Americans, had been sitting around for weeks just playing the frustrating waiting game. He told us how just the other day he had witnessed the most spectacular series of avalanches at camp 2 that sent a chill down his spine and reminded him that the mountain was not ready to be climbed yet this season. Unfortunately for the Spaniards and several other expeditions at base camp, time was running out and they had to pack up their gear and head back home. The two Americans still had a few more weeks budgeted into their time in the Himalaya… I wonder if they were ever able to go for their summit attempt. I hope they were.

In my opinion, this trek through the Khumbu region of Nepal is inappropriately named the “Everest Base Camp trek”. For many trekkers the sole objective of the trek is to reach the jumbled mess of glacial rocks and ice strewn with hundreds of brightly colored expedition tents (if you’re there in May, otherwise, it’s just a glacier) known as EBC. While it is very cool to reach this notorious basecamp, soak in all the excitement (during climbing season), and take a close look at the notorious Khumbu Icefalls, there’s not much else there to admire…. not even Everest herself as she is cleverly shielded by Nuptse, Everest’s western bodyguard, who quite impressively steals the spotlight. 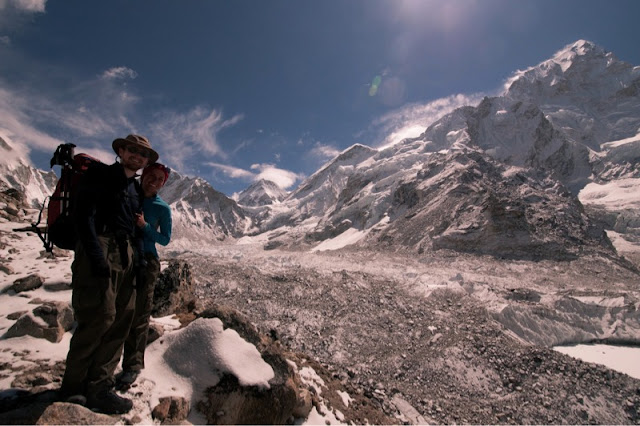 [the massive Khumbu glacier and Nuptse on route to EBC]

The real treasure of coming this far is hiking up to the top of the big black rocky (or in our case, white and snowy) hill that sits directly to the west of Gorak Shep called Kala Pattar. The views from the summit at 5554m (you can even continue scrambling past it to a higher point at 5645m) prove to be absolutely spectacular and reveal much more than just the world’s tallest mountain that we all came here to see. 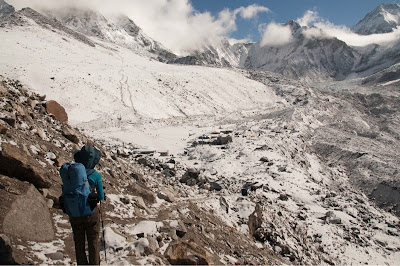 [view of Gorak Shep from the trail coming from Lobuche; the trail leading up to Kala Pattar seen to the left and the Khumbu glacier on the right]

Unable to sleep very well because of the high altitude (5164m) and bitter cold, it wasn’t too difficult to wake up before dawn and begin our 500m ascent of Kala Pattar. I’m not sure if it was the excitement of what we were going to see or just the fact that it was so cold that we couldn’t feel our bodies, but we somehow managed to find just enough oxygen to power-hike to the top in 52 minutes (most guidebooks advise 2-3 hours!!!). Those 52 breathless minutes plus the time we spent on the top were absolutely the most spectacular of my life. Mother Nature treated us to the most beautiful cloud inversion and crystal clear views of hundreds of snowy peaks in every direction. It was amazing to see Everest but it was the whole package of massive mountains as far as our eyes could see that really knocked our socks off!

[dawn over the Khumbu glacier from the summit of Kala Pattar] 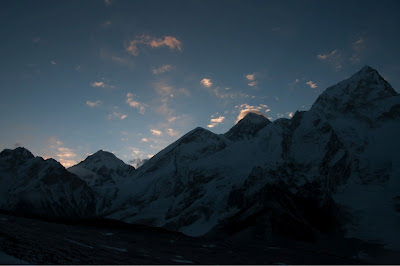 [Everest at day break. Everest is the 2nd peak from the right with the little cloud over the summit; Nuptse is the biggest peak seen here on the far right]

Within 15 minutes of having reached the summit (at this point we shared the top with only one other guy, a Sherpa) the sun crested directly over the Lho La pass and the Everest West Shoulder, illuminating the Khumbu glacier valley. Priceless. 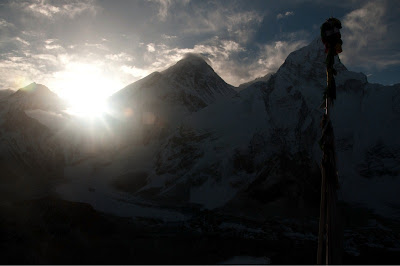 [sun rising over Lho La to the left of the Everest West Shoulder, Everest and Nuptse]

Another mountain that completely shocked us in terms of her grandeur was Pumo Ri (7160m). She is often referred to as Everest’s daughter as she shares the same ridgeline across the Nepali-Tibetan border and stands less than 8 kilometers to the west of Everest. The higher you climbed up Kala Pattar, the more impressive and “in-your-face” Pumo Ri became. WOW! 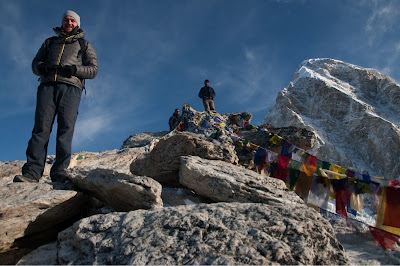 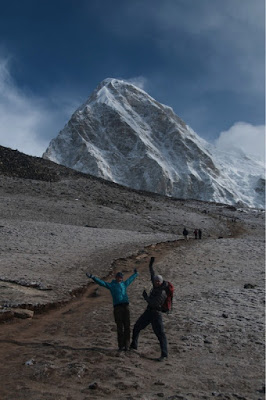 [Pumo Ri as seen from the trail on Kala Pattar]

The hike up to the top of Kala Pattar is a grueling one on account of the extreme high altitude but it is so worth the burning lungs and dizzyingly high heart rate. I would advise anyone attempting this trek to factor in extra time in case of cloudy weather and make every effort to make it to the top of Kala Pattar. It will be a tremendous experience in your life unlike any other!

After finishing the “Everest base camp” part of the trek, we added a couple of mountain passes to our trek. It was nice to veer off the popular route shortly after Lobuche and head towards the very basic lodges at Dzongla directly beneath the mammoth northeast face of Cholatse (6440m). 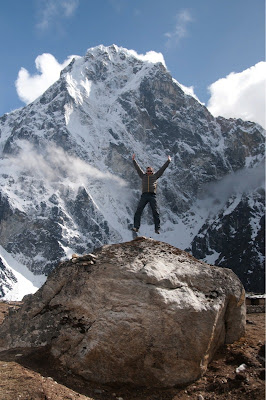 As if just looking at this face wasn’t intimidating enough, check out this video< of Ueli Steck, “the swiss machine” speed climber, soloing Cholatse just before we arrived! While we never saw him, we did run into people who had run into him in the area.

As we made our way towards the Cho La pass very very early one morning we enjoyed tremendous views of Cholatse at dawn and a final glimpse of Ama Dablam in the distance. It was so unbelievably beautiful that it hardly seemed real. 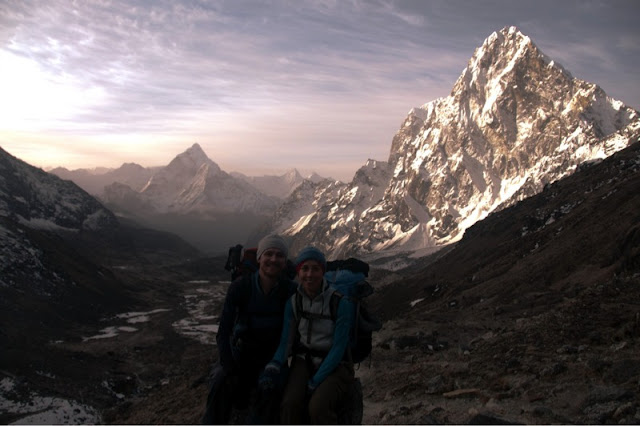 The Cho La pass involves a bit of fun scrambling and an incredible traverse over a wet glacier. This is extremely dangerous terrain with risks of avalanches, rock fall, and hidden crevases. In order to minimize any potential dangers, we aimed to be on the pass at first light whilst the ice was still solid. 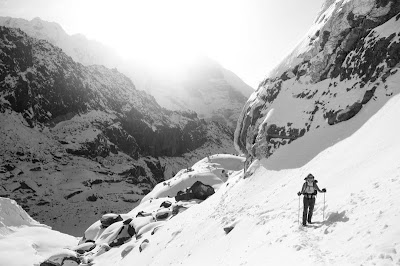 Not only was it amazing to experience this high mountain pass alone on a perfect morning, but it was also unreal to come across very recent snow leopard tracks in the fresh sparkling snow!!! 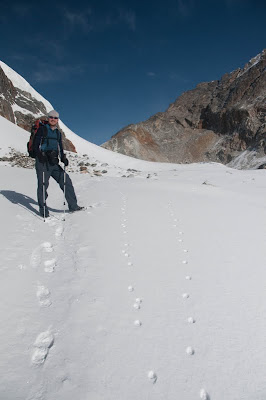 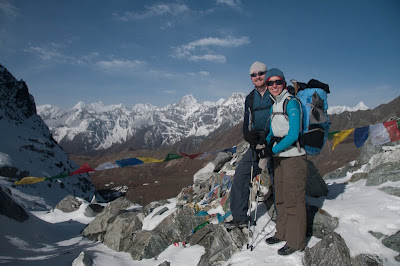 The descent towards the Gokyo area was steep, icy and snowy but extremely enjoyable. 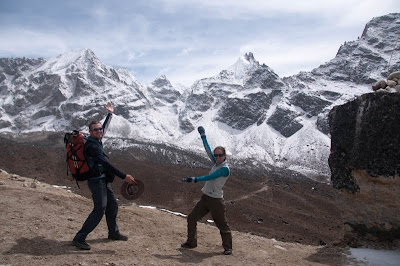 [Looking back at the Cho La pass descent]

Gokyo, which is the small settlement on the shore of the third of five lakes along the Ngozumba glacier, was an absolutely magical and “luxurious” place on the trek. The rooms at the Gokyo Resort were colourful and the dining area was pretty much always warm. It was such a pleasure to spend 4 days here especially since we washed our hair (with ice cold glacial lake water) for the first time in weeks!

The main attraction in Gokyo is ascending Gokyo Ri (5357m), which offers an incredible view of Everest similar to that on Kala Pattar. It’s hard to say which is harder/easier or which is “better” than the other as the perspectives are different and both views are simply unrivaled. See for yourself: 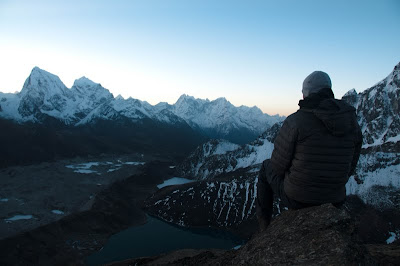 [looking down on the 2nd and 3rd Gokyo lakes, the Ngozumba glacier and Himalayan peaks at dawn from the top of Gokyo Ri] 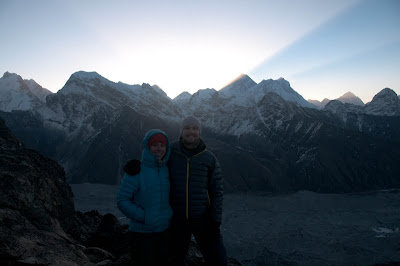 For us, the absolute highlight of the entire trek was our hike up along the lateral morraine to the very last peak called Ngzumba-tse (5600m). Not only is this peak hardly mentioned in any guidebooks or included in any tours, but it’s also not even named on most maps! It is, however, hands-down the absolute BEST view of Everest and so much fun to scramble over the boulders near the top! 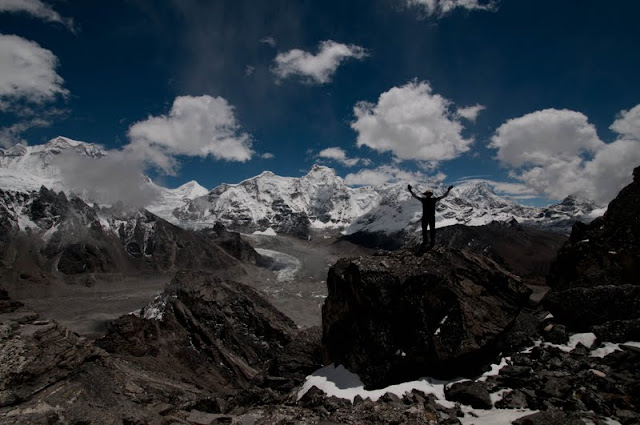 Sitting at the very edge of the Ngozumba glacier (the largest glacier in the Himalaya) where it collides with several other glaciers stemming down from such impressive peaks as Cho Oyu (at 8,201m it’s the 6th highest mountain in the world!) and Gyachung Kang (7952m) which being just shy of the 8000m mark is the highest peak between Everest and Cho Oyu. The views from the top of Ngzumba-tse are exceptionally expansive and the most impressive we saw on the entire trip! 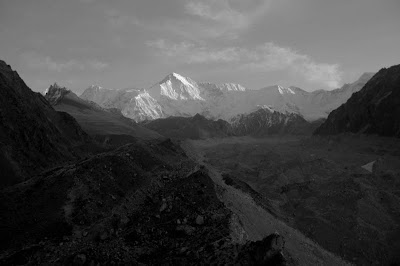 [Cho Oyu seen from the lateral morraine of the Ngozumba Glacier; Ngzumba-tse is the little black peak directly below Cho Oyu]

The way our trekking route worked out, it just so happened that with every view of Everest (from the tops of Kala Pattar and Gokyo Ri) we saw just a little bit more. From the distance and vantage point on Ngzumba-tse, Everest finally looked like the biggest mountain in the world! The full view of the famous South Col (the 7920m “death zone” saddle between Everest and Lhotse where climbers usually set up camp IV), along with Lhotse and Nuptse was incredible! 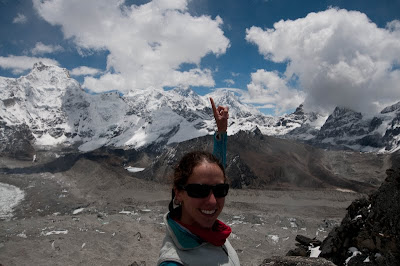 We could hardly believe that we were seeing the majestic trio with our own very eyes! There’s just nothing else like it. 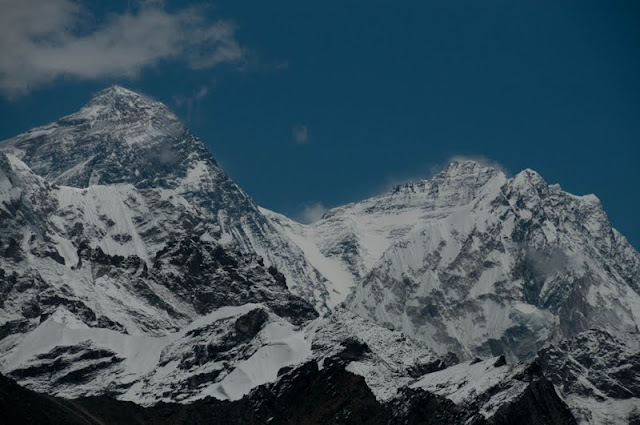 15 days after first having set foot in the Khumbu Himalaya, after tackling yet another mountain pass (Renjo La), we happily arrived back in Namche. With 2 more days of trekking left before our flight back to Kathmandu, we said goodbye to the amazing high peaks and braced ourselves for the take-off experience ahead of us at Lukla airport… 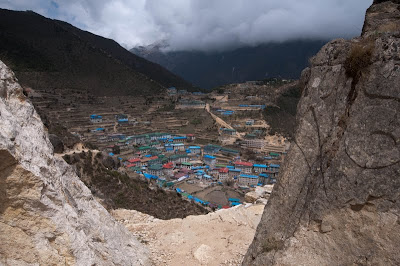