Gray skies, damp and chilly temperatures: just the average summer’s day here in the UK and a stark contrast to the sunny week we spend poolside in France! But we’re back to our usual routine of camping and running around outside so we felt right at home in the hills of northern England’s Peak District. Now, although the name suggests big mountains, there are none here. Rather, there are miles of featureless moor land, sloping hillsides dotted with sheep and a massively long crag called Stanage Edge that is home to some of the best trad climbing in the world. It is a beautiful place that was all abloom with gorgeous purple heather.

We barely had room for our climbing shoes and harnesses so, unfortunately, are not traveling with all the gear necessary to climb. But, Ryan’s friend met up with us for a week of gritstone action and brought with him a full rack of shiny gear. He and Ryan tackled some serious VS (“Very Severe”) climbs while I stuck to the VDiff and Severe routes. I am continuously impressed by the mental commitment that lead climbing requires and the confidence with which Ryan confronts the sport. It’s confidence that is humbling, not arrogant. Ego will only get you into trouble here on this vertical terrain. Although I’m not sure that lead climbing is my cup of tea, it’s great to learn a lot about the physics of gear placement and fall risk assessment. 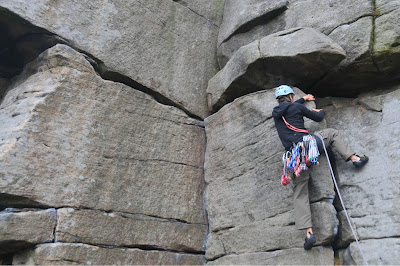 By the end of the week the clouds parted enough to show off a beautiful blue sky, so of course, we packed the camera on a scenic run over and under and all around the cliffs. 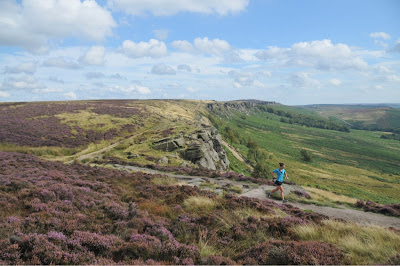 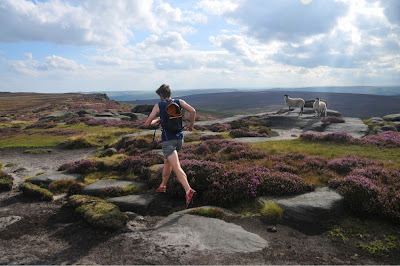 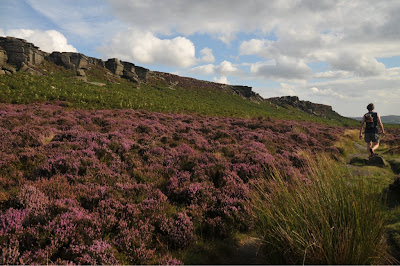 The sturdy rocks made more some really fun running: 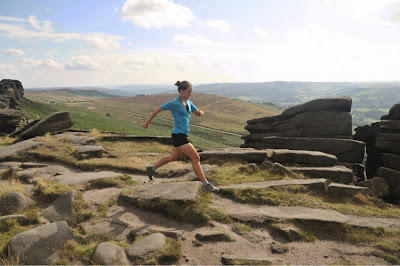 And of course, we couldn’t get by without the obligatory dramatic cliff-edge leap shot! 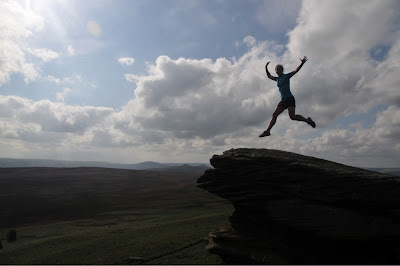 On Saturday we entered the Longshaw Sheep Dog Trial Championship fell race right in the heart of the Peaks. Clearly we were the only nut cases who didn’t think the weather was all that toasty…. 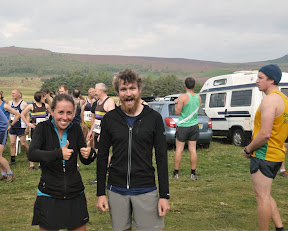 If that was any indication of how tough English fell runners are, then I was in some serious trouble. Sure enough, the field of about 170 runners was stacked. Short shorts, tiny singlets and tightly laced Inov8s were rampant along with some of the roughest toughest middle-aged runners I’ve ever seen. 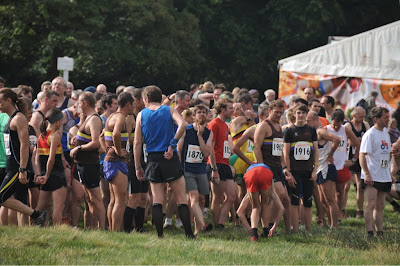 Right from the start, Ryan took position in the lead pack holding back a bit to leave the route finding to some of the local front runners. 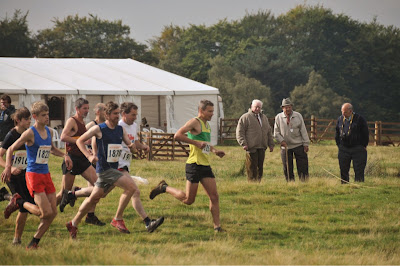 The first few miles weaved up onto Burbage Edge and offered some excellent views which I made sure to enjoy for the two of us since I knew that Ryan would be doing nothing other than barreling full speed ahead in the front. Unfortunately my sightseeing left me stuck in the thick of the pack which led to some bottlenecking at a few fence, bog, and stream crossings. Nevertheless, I felt I was running strongly and throughly enjoyed bouncing from rock to rock. I witnessed a few spectacularly dramatic faceplants ahead of me and was thankful to keep my footing over the 6 miles. 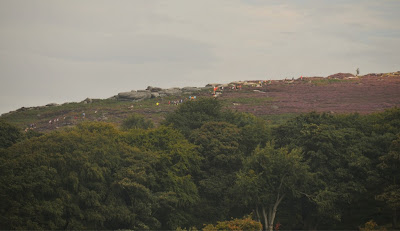 Ryan barrelled across the final field straight for the finish in a time of 40 minutes and change, not the course record but still nearly 5 minutes faster than last year’s top finish! 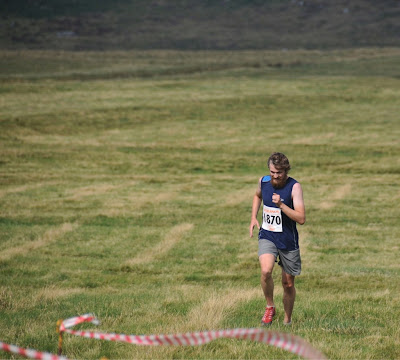 About 14 minutes later I came through with a stream of other runners. The final stretch over the grassy field looks short, smooth and enjoyable from afar but secretly hides its uphill slant, very uneven footing and seems to go on forever. 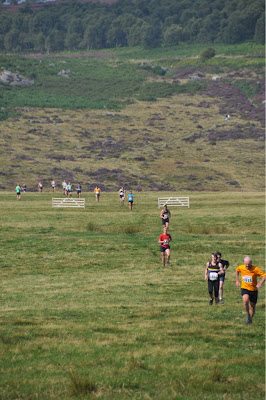 The ever sweet, sweet finish line :-) 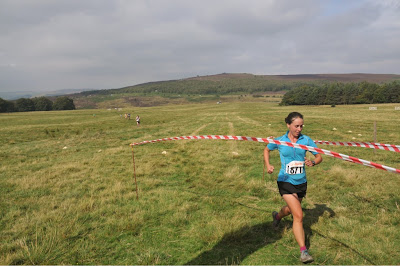 And as if the whole experience wasn’t very English already, the awards ceremony was presided by the president of the historic Longshaw Sheepdog Trials, tweed jacket and all. 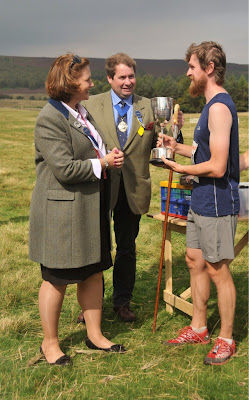 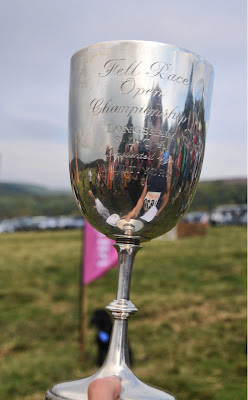 Once the runners cleared off the field the sheepdog competition began. It was absolutely amazing to watch the gorgeous and nimble border collies herd the sheep through gates, into pens and around the field. Such an incredible dog!!! 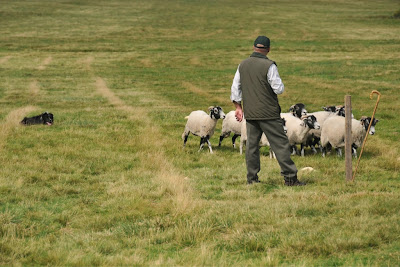 Next, we’re off to the England’s Lake District, which is where all the peaks are (silly Brits). Let’s hope the sun keeps on shining!!!

One Response to "For sheeps and giggles"