Imagine 200,000 hectares of remote mountain, hill, tussock and river landscapes. Now imagine it’s the year 1850 and you’re trying to get from the Canterbury region to Marlborough via the inland Kaikora range. Well, the landscape and the rough road look pretty much the same 160 years later and after spending 2 full days sweating hard while traversing the hills and valleys, we really felt the vastness and remoteness.

A rainy morning plus turning up the wrong trail meant that we got a bit of a late start to the day from Hamner Springs but soon enough we were on our way, straight up the 500m climb to Jack’s Pass. Right off the back the road makes you work hard to earn the first views into the hidden Molesworth Region. The gravel conditions were quite good up the pass but a combination of a car coming up behind me and a hairpin turn threw me off my rhythm and I did have to walk 2 sections until it evened out enough for me to hop back on and pedal. 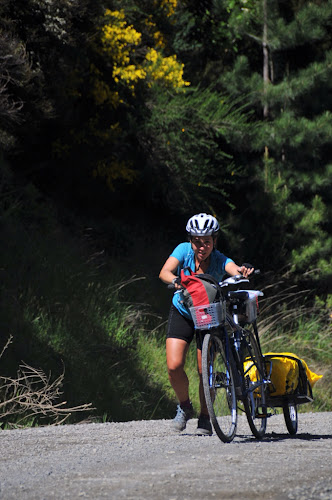 The view from the top revealed a gorgeous snow peaked mountains ahead, a beautiful valley below and a nicely undulating road in between. 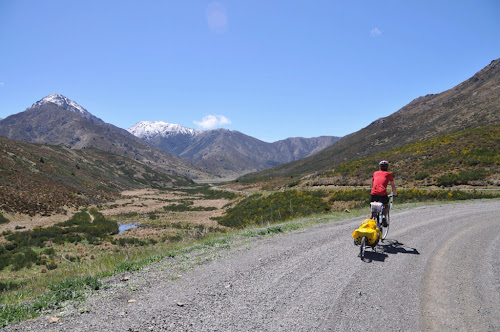 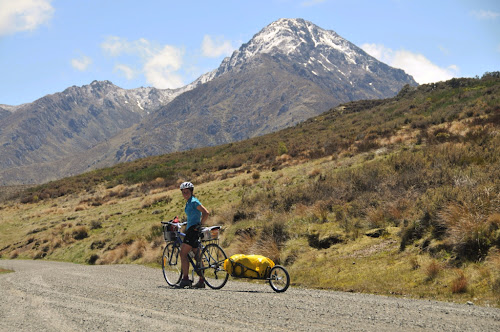 If this is what the next 200km where going to be like then we were in for a pleasure cruise! 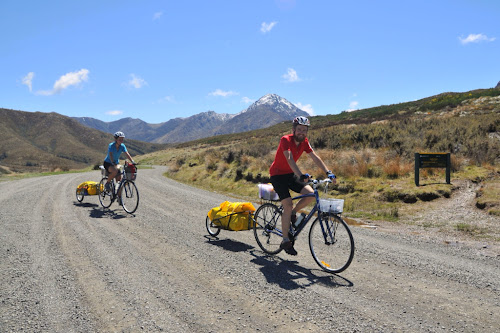 Except for the stunning scenery which continued to impress us at every bend, the road ahead would be full of many challenges and rough patches. The first of which would be a flat tire! 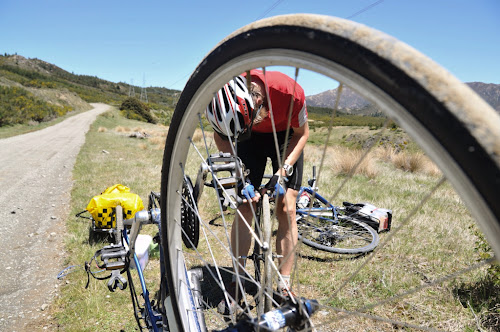 The second was the first of several water crossings: 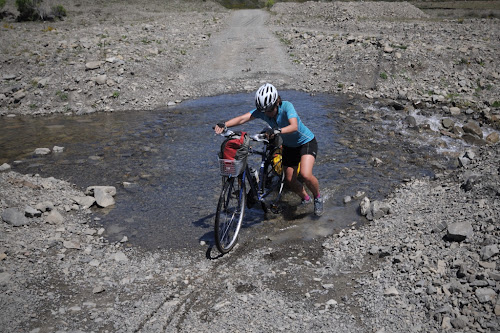 Have you ever tried to push a loaded bike and trailer through slushy wet gravel?! It’s like dragging a rebellious dog across a bog: constantly pulling and sliding in the opposite direction from which you want it to go! 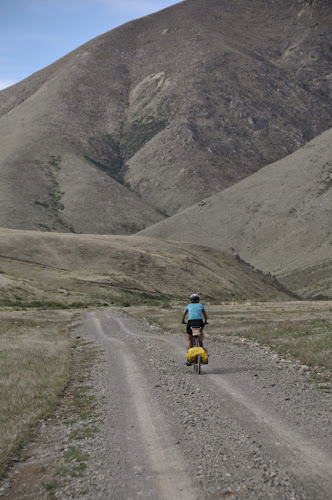 The rutty sections to Acheron hut did a nice job of rattling our brains, but from this point onwards the road is closed to vehicles until late December. It would just be us and, every now and then, a herd of cows (happiest cow on the planet to get to roam freely in such an amazing place!). 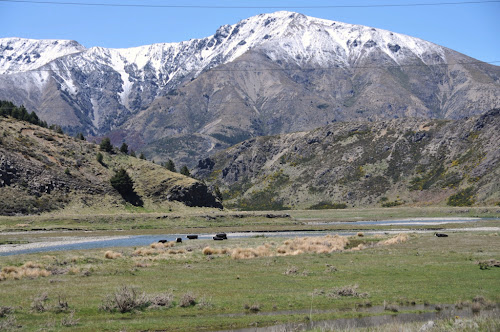 The next 60km to the historic Molesworth Cob Cottage where we would pitch our tent for the night would become hillier, the gravel rougher and our cycling much much slower. A mountain bike would have coasted easily through the terrain but the thinner tires of a touring bike plus the weight and third wheel of the trailer threw us off-balance easily and caused a few skids here and there (the evidence of which is on the bits of missing skin on my knee…) 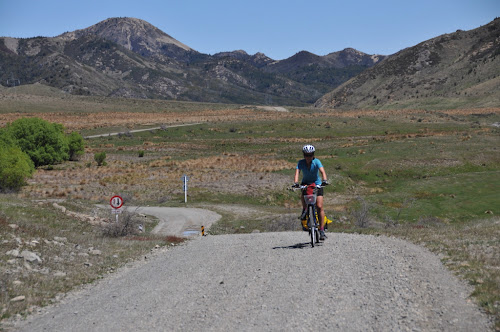 From the top of the steep climb up to the Isolated Flats saddle we could see the road below through the flats. Straight and flat! Yes! Except that once we were on it, the gravel was really thick and we barely manage to keep up a pace of about 10kph through it! It was maddeningly slow. Even more maddening was another opportunity to get our feet wet late in the day without the power of the bright sun to dry them off quickly. 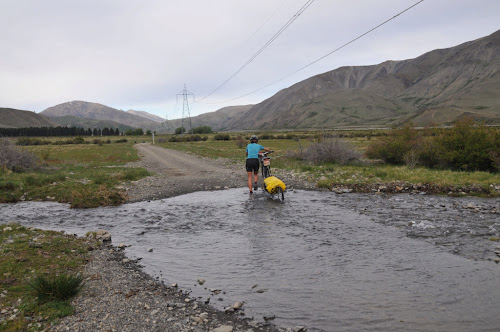 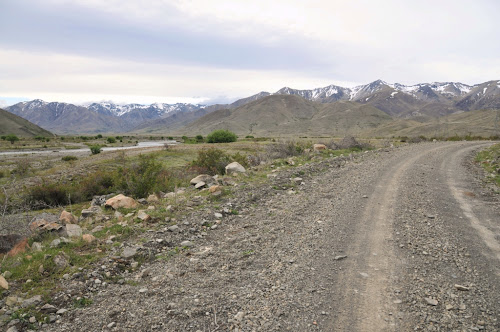 And far in the distance would see the next big pass ahead and the highest point of the road: Wards Pass (1150m). Nearly 200 meters in 1.5 kilometers. It wasn’t too long but it was insanely steep (especially the first half of the climb). Granny gear wasn’t enough for me, I came off my bike. But even pushing it up the slippery gravel was incredibly hard work. By some amazing feat of determination and brute force Ryan made it to the top in one go. He said it was one of the most intense moments of physical excursion he’s faced. Perhaps he’s forgotten what it felt like to run a 4:45 at the Fifth Avenue Mile…! 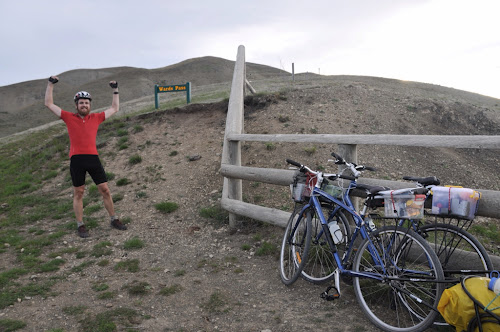 Anyway, feeling like a champ at the top we had just a spare minute to catch our breaths before we carried on as we still had more ground to cover and the sun was beginning its decent. We were chasing the daylight and the camping area always seemed to surely be just beyond the next hill. Or the next one. The sunset was gorgeous and right as we hit the final turn into the old homestead we came across a pack of two dozen horses who started galloping beside us. The thud of their hooves on the ground created an intimidating sound – a surreal soundtrack to the landscape. 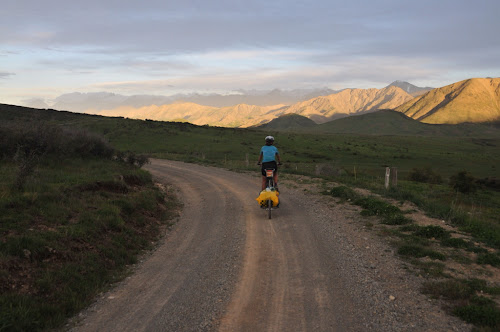 With our feet still soaking wet and our blood sugar levels low from the long day, we went to refill our bottles in the tap by the house. It was dry. Thankfully, we had enough food that didn’t require rehydration to be able to make do without water. We decided to wait until the morning light to search for the stream to pump. And with that, we slept like dogs and the morning came too soon. But a glorious sunshiny day it was! Back on the saddle for more. 120 km to go. 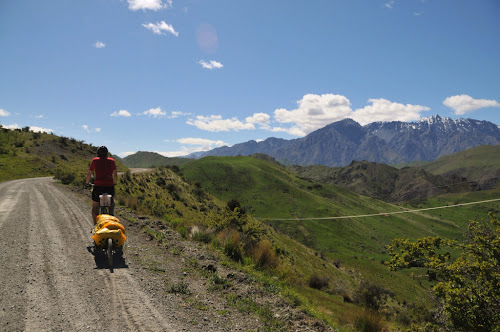 The first 40km of day two where probably the hardest. The gravel became exceptionally thick and sludgy. It was all too easy to get stuck and it felt like the rocks were just sucking you in like sand. On the uphills the back tire would slide freely unable to grip the ground. On the downhills the slightest side movement by the front wheel and the whole bike would slide about as if on butter. We took it slowly. Especially on the unrideable 220m decent from Upcot Saddle. The gravel seemed thickest here and the road hair pinned sharply and steeply along a cliff edge. Holding the brakes as we fought gravity on the way down was exhausting. We were relieved when we got to the bottom and crossed the Awatere River. 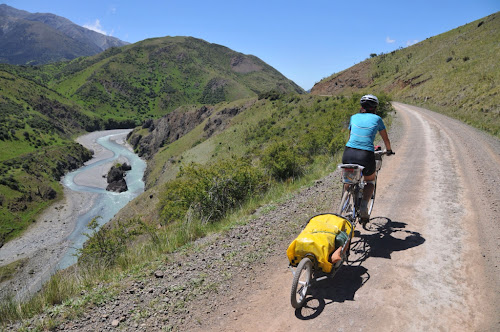 As if by magic, the road improved dramatically and we were able to look around and enjoy the views again. The road along the bluffs wiggled up and down for another 30km or so. And every now and then there were sections of….PAVEMENT! Yes! A smooth road! Sometimes it was only 20 meters at a time but every now and then we got a good 1/2 kilometer of smooth riding. Although it was only ever on the super steep sections it felt like glory! And then there it was, the end of the gravel road: 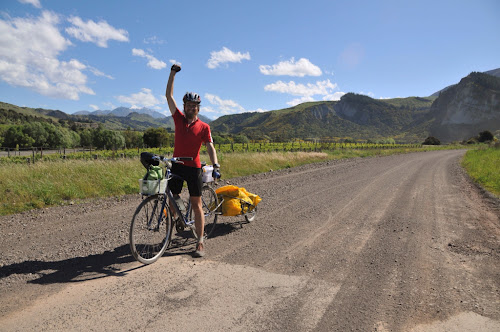 Looking back, the mountains were far behind us and even the hills where becoming smaller and smaller in the distance. The road was flat and straight and from a far we caught a glimpse of the ocean! With the Oyster Bay vineyards on either side of us we had finally emerged out of the mountains and into the Marlborough wine country. 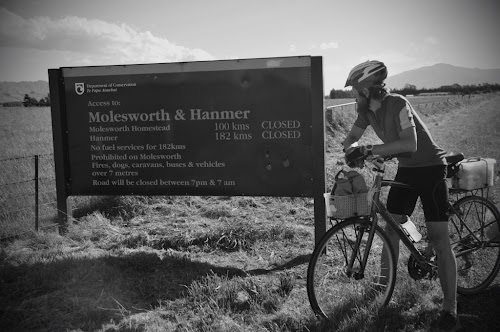 We turned north on Hwy 1 for the final 22km to Blenheim. Little did we know that a rude 8 kilometers of uphill awaited us with a gusty headwind that really tested us at the end of an already long day on the saddle. We made it to Blenheim in time to run across the road from our campsite and grab a pint of Montieths ale and some high calorie fish ‘n chips.

The trip over Molesworth was an unforgettable one as hard as the scenery was beautiful. The sense of isolation and the beauty of the landscape was breathtaking. It’s these kinds of places on earth that fill you with life and really make your eyes widen with wonder and awe. And as far as travel goes, there just isn’t a better way to experience the Molesworth than from the saddle of a bicycle. The road is not technical. It’s always wide and covered in gravel (with all the bumps, rocks, ruts and holes that come with that). However, it is challenging on a loaded touring bike. The days were long and we were definitely pushing our limit. For the next time, I would absolutely ride a mountain bike and take 3 or even 4 days (not 2) to cover the distance. The stability of a fatter tire would make all the difference in the world in navigating the rougher thicker sections more confidently and the extra time would allow you more time to stop and enjoy just being – something I wish we had had more time to do here. This is just a magical place on earth.