One of the greatest multi-day treks on the planet. This 120 kilometer circuit trek takes you all the way around and into the Paine massif (our route covered approx 165km). It’s like being in the Dolomites and the Himalaya at the same time – the young, sharp, granite Paine range sits right next to the ancient and majestic Andes mountains.  The Southern Icefields of the Patagonia are the world’s third greatest fresh water reserve (after Antarctica and Greenland) and it is because of that very ice that Torres del Paine is so amazing – massive glaciers have carved the granite rocks into impressive towers that give the park its name. 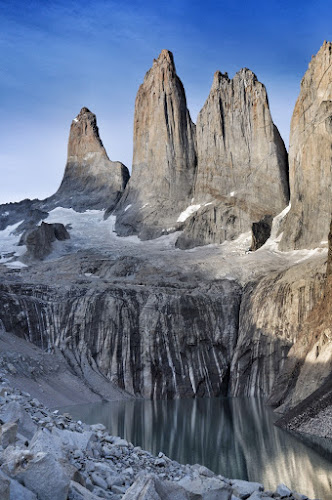 As I mentioned in my last brief post, a tragic forest fire (started by a tourist) has devastated the park. While we were on the trek during this time and were among the last trekkers to be evacuated (because we were so far away), the location and timing of the blaze did not impede our experience and we were still able to see everything we set out to see. The weather held out beautifully for us giving us gorgeous clear days and unobstructed views of the peaks and glaciers while still throwing in plenty of cloud drama and high winds to remind us that we were in the wild Patagonia. 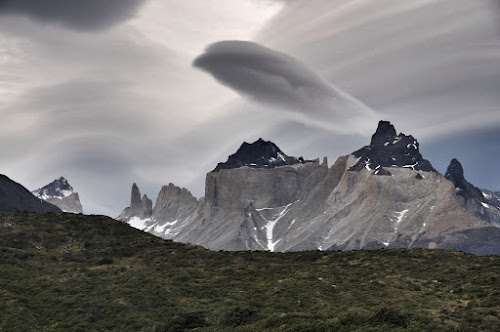 We began the “circuito grande” trek (otherwise known as the “O” trek) from the Administration building about 20km south of the Paine range. While most people skip this section by taking a shuttle or boat closer to the peaks, this first portion of the trek was a fantastic introduction and built up the anticipation of the adventure ahead. For 4 hours we walked across open windy fields along the Rio Grey with the peaks ahead of us. 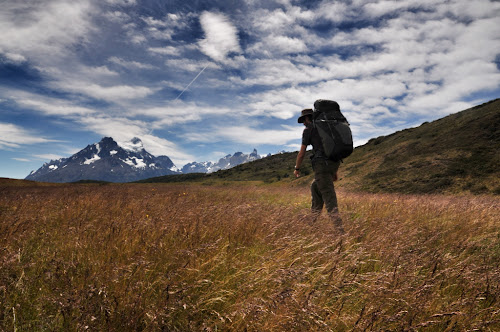 The closer we got to them the bigger and bigger they became – it was impressive and mesmerizing. 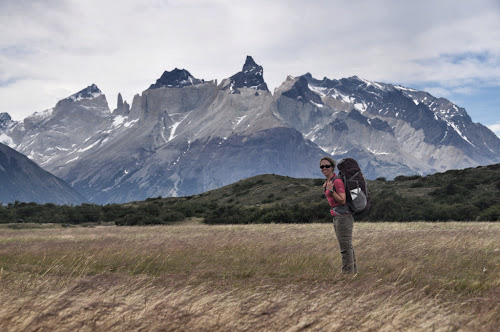 On our first night (Dec 23) we pitched our tent at the Refugio Paine Grande with a teasing view of the “cuernos” (horns) and into the Valle Frances overhead. This spot is particularly windy as the air is violently pushed across the enormous Glacier Grey to the northwest. Even the water was blown across the surface of Lago Pehoe! 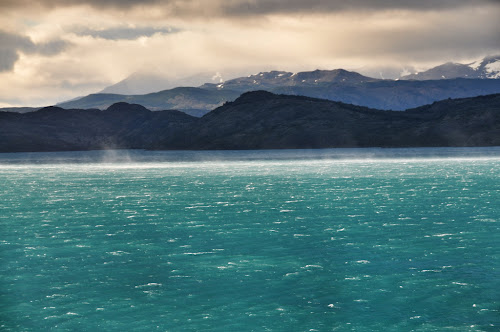 I don’t think anyone slept a wink through the raging gales that relentlessly thrashed the tent walls throughout the night. Unfortunately, it was a few kilometers upwind of this location that the fire began 5 days later. This area will never look like this again: 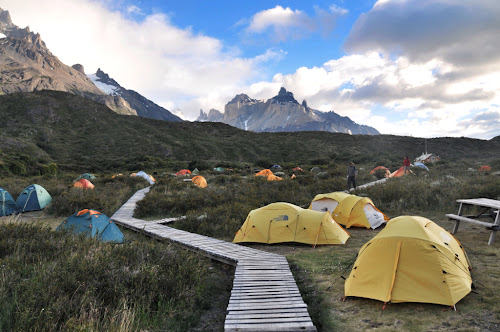 From here we hiked the traditional and popular “W” route into the French Valley and then to the Torres before continuing onto the “O” track that lead us around the back of the peaks along Lago Paine to Lago Dickson and the much-anticipated Paso John Garner at which point we had to head 50 kilometers back the way we came to evacuate from the fire on the western edge of the park. It was an amazing 9 day journey and a dream come true to experience the heart of the Patagonia.
Without further ado, here are the highlights of the trek in photo form:
El Valle Frances (the French Valley) was our favorite part with 360 degree views of glaciated peaks, granite towers, sharp ridges, vertical walls and even an imposing feature aptly named “La Catedral” or “The Cathedral” – it was an incredible spot to celebrate Christmas Eve.
The western side of the French Valley: 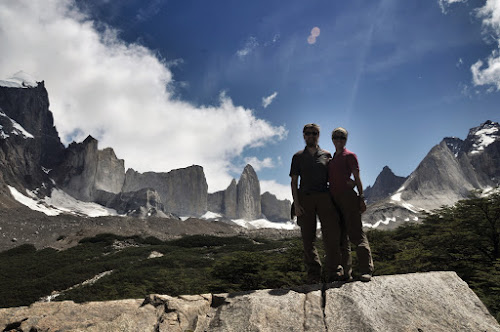 The eastern side of the French Valley: 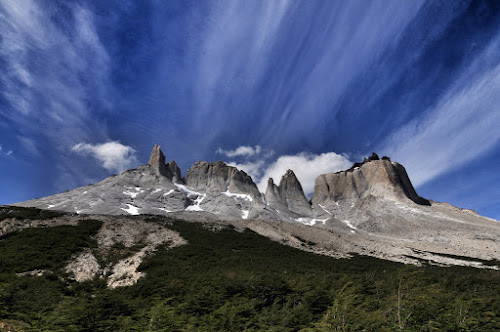 And here’s a panorama shot of the French Valley:

Next, of course, are the epic and instantly recognizable “Torres” – the towers. We woke up at 4AM (at which time it was already bright enough to hike 30 minutes from our campsite up to the “mirador” without having to turn on our headlamps) to watch the granite towers glow with the first rays of the sunlight. We had heard all about the rock’s salmon colored hue but nothing could prepare us for the luminescent shade of orange that radiated from the peaks from exactly 5:33 to 5:38AM. It was unreal!!! (I haven’t messed with the color saturation of the photo below! That is actually how brightly the sun shone on the torres!) 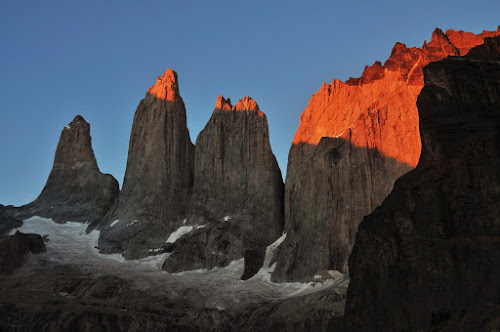 It could not have been a more perfect morning: 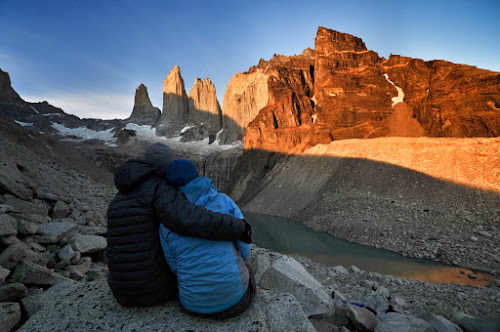 By 6:30AM, everything was fully illuminated and called for a celebratory jump! 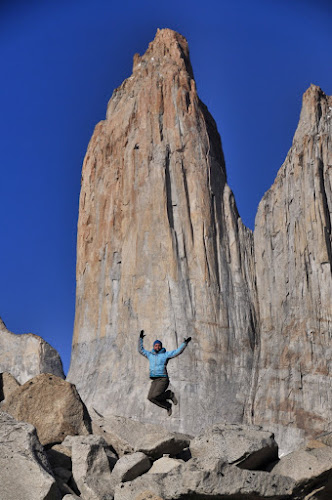 The day the fire began (unbeknownst to us), our walk from camp Las Torres to camp Seron took us through a 5 kilometers section of gorgeous alpine daisies. The fields were delicate and full of life – a stark contrast to the destruction unfolding on the opposite side of the park… 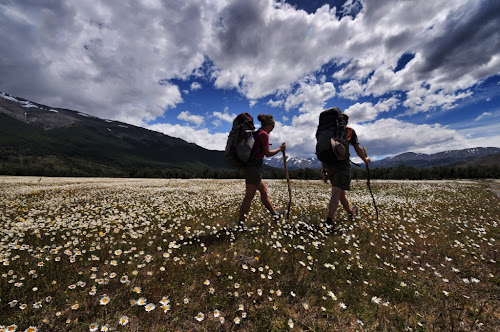 It wasn’t until Dec 28th that we found out about the fire when we arrived at camp Dickson. We were informed that we were on the safe side of the flames (meaning that we were barriered by the mountains and the wind was blowing the flames away from us anyways). They didn’t have much information and suspected that everything would be clear in a day or so… if only that would have been true… five days later and the flames are still burning strong :-(
The camp at Dickson Lake was one of the nicest areas of the park with serene views of the north side of the French Valley on one side and impressive views of the Glacier Dickson across the lake on the other. 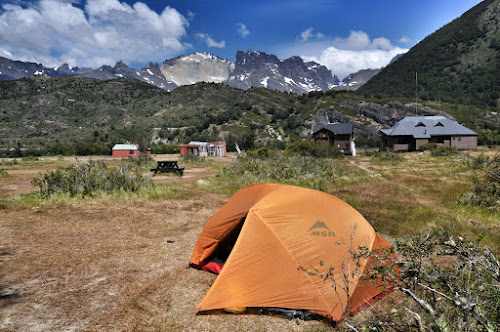 Although, officially, the park was now closed and an evacuation order was issued, it was safe enough for us to continue hiking towards the next camp at Los Perros and up to the Garner Pass before turning back. 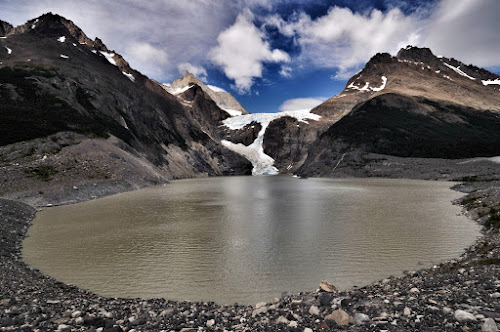 We were quite excited to hit up this final major highlight as it was meant to epic. The anticipation built as we made our way up the boulder fields to the pass as the glacier didn’t come into view until the very last moment. Bang! Incredible! 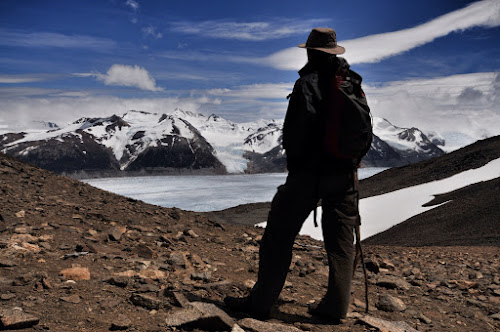 At 6 km wide and 30 km long, Glacier Grey is a sight to be seen! Clean and clear and crystal blue ice as far as the eye could see!!! Wowzers! And as if that wasn’t impressive in its own right, there were countless more glaciers tumbling down from and hanging on to the edges of the Andes mountains ahead. The air was unusually still enough at the top of the pass for us to enjoy a good hour of jaw dropping views before the clouds started building and we decided to head back down to our tent at Los Perros. 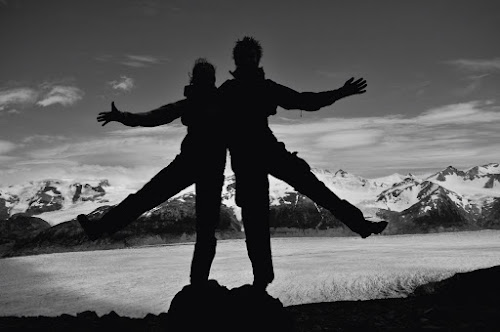 Seeing the glacier under such clear conditions was definitely a highlight and an impressive way to wrap up our Torres Del Paine adventure.

Sadly, the fire forced us to turn back from here but we could not have asked for a better 9 days in the Patagonia. Which is why it breaks my heart to see if go up in flames, especially since the cause was utter recklessness and irresponsibility on the part of an ignorant tourist. Yes, those are harsh words but the damage is vast and irreversible both to the natural environment and to the livelihood of the people of this area who depend on the tourism to make ends meet. The people of Chile are devastated and quite rightly so for it is truly a magnificent part of the world.